Need inspiration for some fun, STEM projects to do at home? Check out the new YouTube series “Make with me”! Join the Modular Robotics staff as we try out fun, challenging, robot activities that we can do around the house, like building this Hand Washing Timer robot: Of course STEM at Home doesn’t need to be involved projects! Kids can learn a lot about robotics just by building their own Cubelets racing robots. Whether it’s harnessing creativity by building robot seascapes with LEGO or figuring out how to code a Toilet Paper Ration Robot in Blockly, the “Make with me” videos have something for everyone. Check it the whole playlist on YouTube and don’t forget to subscribe so you never miss a new video!
Carolyn Wilke    April 27, 2020    Cool Stuff    Computational Thinking, Creativity, Cubelets, Cubelets app, make with me, makerspace, programming, YouTube     Leave a comment
As we incorporate STEAM opportunities into our classrooms, there are many different ways to scaffold an activity to meet our needs. Some projects lend themselves to student design from the very beginning, and others lend themselves to students solving a problem we’ve identified for them (like designing a maze-solving robot or a robot to help the blind). This balance is integral to exposing students to every step of the design process while also making sure we have time to address all the standards we need to cover. But student motivation is a major factor in how efficiently we can work through material each year. One way to increase student motivation is to put students in the driver’s seat earlier, by introducing subjects with creative hooks and giving students the space to define the projects according to their understanding. Every project students do requires a discussion of the criteria and constraints. Whether those are teacher-given or student-provided, criteria and constraints indicate how students will be assessed on their design. Criteria are the requirements for a project. If any of the criteria are missing, then the design is incomplete. Constraints are the limitations for a project. What will students not have access to? For instance, are there considerations about price, location, or size? END_OF_DOCUMENT_TOKEN_TO_BE_REPLACED
Emily Eissenberg    December 4, 2019    #CubeletsChat    Creativity, Cubelets, Cubelets Chat, education     Leave a comment
Michael Jaber has seen first-hand the profound effect Cubelets robot blocks have on students. Students who tended to sit back now step up and lead; those who were shy are now willing participants. Those who previously had no interest in STEM have joined the STEAM Team at Jefferson Elementary School in Sheboygan, WI. Mr. Jaber is the Coordinator of Instructional Technology. Every Thursday afternoon, he spends time in classrooms showing students new technology gadgets. As one of the featured gadgets, Cubelets have piqued the interest of all the students. Cubelets are used to explore robotics using a constructivist approach, and Mr. Jaber has seen teacher Diane Moon successfully use them in the Next Generation Science Standards fifth-grade curriculum. When Jefferson Elementary first received Cubelets, they used them in a technology center rotation to allow students to explore and determine what the function of each robot block was This lead to purposeful conversations and the students worked together to create the specific robot construction that they had in mind. END_OF_DOCUMENT_TOKEN_TO_BE_REPLACED
Carolyn Wilke    September 27, 2017    Teacher Feature    art application, communication, Creativity, cross-curriculum, grade: 1-5, language arts application     Leave a comment
As Space Shuttle Endeavor is transported to its retirement, my Facebook and Twitter feeds are flooded with comments and photos of its final flight.  I can’t help but feel like this is, at some level, the end of an era. An era of big dreams and phenomenal achievements. An era of curiosity, exploration and discovery. It’s the end of an era of great things.

In my opinion, the Shuttle program is (symbolically, and perhaps physically) the single largest achievement humans have ever made.  A highly reliable, mostly reusable machine that can transport and sustain human life outside our protective atmosphere, bringing with it complex scientific equipment, and the spirits of a nation. What enabled its success?  A passion for science, the desire for discovery, and the collaboration of thousands of individuals.  Thousands of people working together in teams, collaborating to design and build each of the 1,000,000+ components that comprise one shuttle.  Each of those parts must to do it’s job AND work perfectly with each of the other 999,999 parts. This complexity and collaboration is the motivation behind Cubelets. Just one Cubelet doesn’t do anything useful, just as a single NASA design team couldn’t have built a Shuttle.  But when you put a few Cubelets together, they spring to life.  Working as a team, each of the members of the group accomplishes what none of them could accomplish individually, and amazing interactions result. 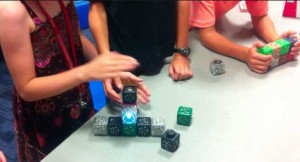 There’s one way to ensure that the end of one era is succeeded by great things in the next:  by educating and encouraging kids to do great things.  Children possess such amazing creative capabilities.  Every group of students we’ve given a set of Cubelets to has combined them in a new way to make a different robot that is completely unique from anything we’ve seen before.  It’s incredible! Dream it and build it – just like NASA.  Let’s inspire the next generation of dreamers!
Jonathan Moyes    September 22, 2012    Uncategorized    Complexity, Creativity, Cubelets, Discovery, Endeavor, Space, Space Shuttle     Leave a comment

I’m helping organize the Creativity & Cognition conference.  It’s an interesting mix of artists, computer scientists, and just plain creative people.   Which leads to the question: How do kids learn to be creative?    To create is to make; so learning to make things is an important part of learning creativity.  Construction kits like Lego and Meccano offer a structured (“scaffolded”) way to make physical things; and programming languages like Seymour Papert’s Logo and Alan Kay’s Squeak have offered kids a way to make computational things.  Now we’re amidst  a revolution that brings together the physical and computational in massively parallel and distributed ways.  So, we need construction kits to scaffold kids creativity in this new world.
mark gross    March 16, 2009    Uncategorized    Conference, Creativity, Creativity & Cognition     Leave a comment